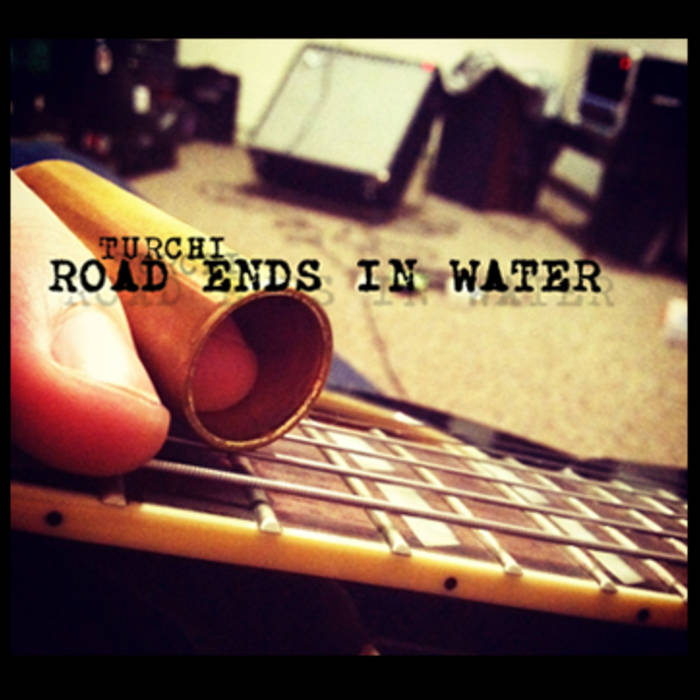 Nathaniel Pryor One of the best albums I've heard in my life! I properly listen to this album at least 7-9 times a week! Won't let you down! Dr. Recommended. Satisfaction guaranteed! Favorite track: Watchya Tryin.

"The spiritual flame passed from Fred McDowell to R.L. Burnside to Kenny Brown now lights up the guitar band of TURCHI. With an assist from likewise rowdy North Mississippi Allstar Luther Dickinson, the crunch and slide of this blue trio assures that the kudzu boogie will long continue. Their own sweatbox stomps and moonshine grinds throb to a hill country heartbeat, the same moan 'n' drone one which crowned the trinity of Marshall, Tate, and Panola Counties as the groove capital of the world. From the constantly writhing tangle of twin serpentine guitars (one of which always employs that hulking brass slide on the cover of Road Ends in Water), you'd swear TURCHI are rogue Chulahoma jukesters. And not tobacco-belt Tar Heels headquartered out of North Carolina. No doubt leader Reed Turchi has been absorbing every drop of local ritual up in those Mississippi hills while rooting out backwoods savants (like Little Joe Ayers) to record for his own Devil Down label. So with the crack, then crash, of a drum kit, Muddy's "I Can't Be Satisfied" and their own carnal "Do For You" bolt out. The same propulsion works for "Shake 'Em," the regional anthem that's been putting pelvises into motion ever since its preview inside juke houses many moons ago. "Keep On Drinking," however, doesn't even try to get it on, instead sniffing out a rat, then tending to its extermination. It's a cold shot--but danceable, nonetheless. The real terror comes when being fed into the maw of the beat, "Dr. Recommended (Satisfaction Guaranteed)." It's slow qualor--Turchi and Dickinson's filth guitars sideswiping one another down a the bottom of a gutbucket--is just how Nature intended sleaze to sound."

“...Then comes Turchi with another representation of the northern Mississippi sound... In "Do for You," an uptempo toe-tapper, Turchi's vocals are reminiscent of Bob Dylan. Yes, I know. I'm not supposed to compare anyone to Bob Dylan, but it's not just the sound, it's also the storytelling quality that brings Bob Dylan to mind. ... In an interesting twist in the next song, Turchi sounds a lot like a young Mick Jagger. In fact, this song sounds a lot like what The Rolling Stones did in the early days when the band recorded songs like "Little Red Rooster". With the next song, also like The Rolling Stones, Turchi covers Muddy Waters. This version of "I Can't Be Satisfied" is a solid tribute to one of the great bluesmen. The vocals are very low-fi and the slide guitar will make you want to get your hips moving. With songs that range from classic blues and slow burners ("Don't Let the Devil Ride") to uptempo gems "Keep on Drinking", this album has everything a blues fan could want. 5/5 Stars."
Gary Schwind - Schwindy's Indie Music Blog, LA Examiner

"Remembering this form of the Blues can be summed up with one word, “unconventional”, and Reed Turchi certainly demonstrates that, he doesn’t sound like anyone else, nor does he have to, and his song-writing ability displays a maturity beyond his years, albeit with a “dark” edge… From the record’s opening track, “Keep On Drinking”, a song about domestic violence, a desire for revenge and murder, with wonderful, thick, fuzzy guitar riffs and relentless percussion set the scene for what’s still to come. (One wonders to what extent these songs are autobiographical). Other originals such as “Watcha Tryin’”, “Do For You”, and “Dr. Recommend” continue the overall theme, compelling and evocative, with lashings of the aforementioned guitars…There’s a synergy on display there, nowhere more so than on “Junior’s Boogie”, another Turchi original, and the album’s highlight for me, compelling stuff indeed…Does the record have that desired originality? Is it a true representation of its intended context? Will it sustain repeated listening? Does it offer anything new? Is it worthy of a place in any collection? My answer is a most emphatic “Yes”. Highly recommended."
-Big Mike Hotz, presenter of "Saturday Blues," Radio Adelaide, South Australia

"On his first solo album Turchi, who is based in Chapel Hill and plays guitar and sings,Chris Reali (a musicology student at UNC-Chapel Hill) on bass, and Cameron Weeks (Blackskies) on drums, and the group is joined by the great Luther Dickinson on three tracks. The Lutherized songs, in particular Dr. Recommended (Satisfaction Guaranteed) has a wealth of swagger. Luther brings it, and it's hangin'. Turchi brings a Dylanesque-tone to Road Ends In Water akin to Bob's more recent work (I'd bet money a very discerning Dylan would dig this album) filtered thru Junior Kimbrough and R.L. Burnside alumnus Kenny Brown. Reed Turchi could almost be, as Brown was to Burnside, Kenny's adopted son. That's not to say Turchi is aping. That's not it. But Kenny is a predominant and fine flavor. Turchi is a tight band and I'd be very interested to see/hear them live. Reed and his friends have made a fine first album that reps them well...This is original and very solid North Mississippi hill country (and delta blues reworks) that should satisfy any fan."
Rick Saunders, REAL DEEP BLUES

“Turchi has done a masterful job of presenting his own music...I highly recommend this recording to anyone who likes the pure blues in an unadulterated form done by modern musicians. I feel that Turchi has done an excellent job.”
Bman Blues Report - Bman's Blues Report

Devil Down Records has forged a formidable reputation for releasing some of the finest North Mississippi Hill Country Blues of recent times – and, with this release, head honcho, Reed Turchi, proves he can not only record/release quality NMHCB, but he can play them as well.
With his eponymously named band, Turchi, he confidently lays down mesmerising hill country rhythms with an authenticity that belies his upbringing, and that would bring a smile to the faces of Burnside, Kimbrough et al.
Six fine originals meld seamlessly with four well chosen covers, the buzzing slide and trance-inducing rhythms he and guest Luther Dickinson lay down on “Keep On Drinking” recall all of the hill country masters even down to Cameron Weeks’ Spam inspired drumming.
Kimbrough’s funky “Do The Rump” comes to mind on “Watchya Tryin” – T-model Ford meets RL Burnside meets the North Mississippi Allstars on the “head-banging” “Be Alright” – brooding vocals and slide allied to trash-can drums conjures up visions of a North Mississippi Hill Country Canned Heat on the traditional “Don’t Let The Devil Ride” – whilst the haunting slide, marching drums and gospel harmonies of “Keep your Lamp Trimmed And Burning” will have Fred and Annie McDowell smiling in blues heaven.
Add in a Hill Country version of Muddy’s “Satisfied” – a funky Kimbrough inspired “Junior’s boogie” – and the pure Burnside of “Shake ‘Em” and you have a set that will delight all lovers of downhome blues.

Track Name: Keep On Drinking
Well I’ve known him
Long as I’ve been alive
Seen him just twice now
Sober to drive
Beats his wife and
Yells at his kids
Ain’t no reason honey
To let him live

Keep on drinking
‘til he falls
Track Name: Be Alright
Back of a flatbed
Pulled off of a backroad
Said I don’t really like your style
I say Lord Lord let it go

Bandcamp Daily  your guide to the world of Bandcamp

Featuring Gary Bartz, 5 years of Rhythm Section Intl and an LP of the week by Nicolas Jaar